A trip down memory lane

It seems that The Littlest Knight is not my very first 32-page illustrated children's book.  At the bottom of my nightstand drawer, I've been holding onto a book that I made in 1980.  I was either in grade 4 or 5 at Barrhaven Public School.  We wrote haiku poems in French, illustrated each haiku and then bound our books in a cardboard cover with fabric on top for a nice look.  I remember using an iron to somehow adhere the book pages to the cover, and we actually hand stitched the binding with the help of our teacher.

Here is one of the 2-page spreads from that book: 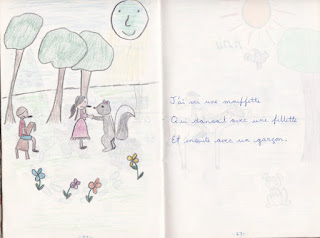 I think I still draw almost exactly as I did when I was 11 years old.

I know I have another book of illustrated sentences from grade one somewhere, but I'll have to dig that up for another blog post.

Posted by Tytanima Press at 07:30 No comments:

Jack of all trades!

I've come to discover that self-published authors need to quickly become "Jacks of all trades", and the writing itself is just the tip of the multi-tasking iceberg.

When I first wrote the story of The Littlest Knight, I never thought much about what lay ahead as far as responsibilities went.  But the work already began as I had to consider my own requirements: Did I want to self-publish? Would I attempt to illustrate the book myself, hire a friend or look for an independent artist?  Would I go with a self-publishing company or do the printing myself?  What did I want the final product to look like?  How many copies should I print?

Once some of those questions were answered, I researched contracts between authors and illustrators to ensure both my illustrator and I were protected and fairly compensated (in case we should eventually see any profit).  Fortunately for everyone, I did engage an illustrator - and an awesome one at that - but it was a cooperative effort to settle on the layout and design so we were both happy with the final product.  The fine-tuning and editing are skills all on their own.

Now, I'm also the accountant for my self-publishing company, although any true accountant would probably cringe at the way I'm keeping track of things.  (It works for me, and everything is accounted for, but all those accounting classes from university have been long forgotten.)  And, just today, I wrote my first press release and sent it out to the media to announce the launch of The Littlest Knight which means I'm also the publicist for the company. :)

So, writer, business analyst, contract negotiator, layout designer, accountant and publicist.  Who would have dreamed I would have to develop all of these skills just for one book?  I'm really enjoying the challenge, though, because for each step I take, I feel more confident that I could do this all again.

By the way, our first signing and the official launch of The Littlest Knight will be held on Saturday, June 1st from 11am to 2pm at Tag Along Toys in Kanata (499 Terry Fox Drive).  Both Darren and I will be there to sign books, and we'll have stickers and colouring pages for the kids. We're so grateful for the support this local business has given us.
Posted by Tytanima Press at 16:33 No comments:

Email ThisBlogThis!Share to TwitterShare to FacebookShare to Pinterest
Labels: Publishing, The Littlest Knight

This past week has been a whirlwind of excitement.  It's hard to believe that the shipment of books only arrived on Monday.  On Tuesday, Darren and I got together to autograph dozens of copies.  Even though I've had some experience signing autographs (on rare occasions after some of the musial I've appeared in), it will probably always feel a bit strange to me.  My handwriting is, most often, tidy and very straight, and, for some reason, I keep thinking that my signature should be more "artsy".  Certainly, the way I sign cheques shows a certain flare after years of practise, but I decided my autograph had to be different.  Anyway, I digress.

On Wednesday, I headed out to an independent bookstore in the downtown area (near my workplace) and asked the owner if he'd consider carrying the book.  He was very enthusiastic, and asked me to bring a few copies to the store when I was able.  So, Perfect Books became the first bookstore to agree to sell The Littlest Knight and they now have copies in their children's book section.  The next day, I took a small order of books to Tag Along Toys where the owner was more than happy to support another local area mom, and she even took a copy home to read to her own child.

Sales have been going well so far, and there will be at least two book signing opportunities.  I'm really looking forward to these because I want to reach a broader audience than just friends and family.  But they are the ones who have boosted my confidence, and I'm so grateful for their support.

I'm now considering next steps in my writing "career".  I've got a few story ideas up my sleeves, and I'm thinking of translating The Littlest Knight in French.  I can't imagine we'd sell as many copies in French, but I would love to be able to donate a copy of the book to my son's school.  If that requires buckling down and working on my French, then I'll definitely give it a shot.
Posted by Tytanima Press at 17:30 No comments: