Where has the time gone?

This blogging business is not easy when you have a lot of things on your plate!  Of course, that doesn't mean that things aren't happening.  Last month, I received the final edited translation of Le plus petit des chevaliers from my French editor.  Roxane is someone I know from performing in musicals with the Orpheus Musical Theatre Society, but as with most performers I know, she also has a "regular day job" as a translator.  Because The Littlest Knight is so close to my heart and a labour of love, it made sense to approach someone I know well to work on the French version of the book.  Roxane is also a mother to a young child, and this project was a departure from the more formal government and corporate documents she is often asked to translate.  I'm so grateful to have been able to include her in the continuing evolution of The Littlest Knight.  The translation is now with my wonderful, multi-talented partner-in-crime, Darren Bird, for layout with his amazing illustrations.

Also, during the summer, I had dared to send a copy of The Littlest Knight to the Duke and Duchess of Cambridge as a small gift for their new son, Prince George.  I sent it in the hopes that maybe one day they might read the book to him.  When I was younger, I had actually sent a card to congratulate Prince Charles and the then Lady Diana Spencer on their nuptials.  I think I was 13 at the time, and it was thrilling to receive a reply from one of the royal secretaries.  This time around, the response included a lovely photo.  I do wish the royal couple well, and hope they get as much joy from their son as I've received from mine. 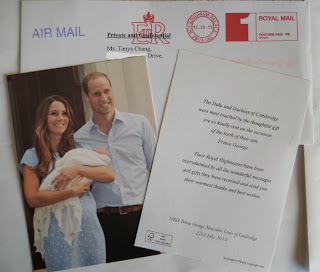 Posted by Tytanima Press at 11:51 No comments: