A great year nears its close

I know I haven't been very diligent about updating my blog, but the year is coming to an end, and I can finally post with certainty that the French translation of my book will be available before Christmas!  I set up the Etsy listing to take pre-orders, and the toy store that carries The Littlest Knight will also be selling Le plus petit des chevaliers as soon as we have copies.  My next task will be to write condensed versions in English and French so that I have something a bit shorter for public readings as the entire book itself can be a bit lengthy for these events.  I've already been approached about doing a reading and selling the book at the next book fair at my son's school.  It's a bit daunting given that French is my second language and I'm not fluently bilingual, but it's a challenge I'm willing to undertake!  For the translation of the book, I gratefully aknowledge the contribution of Roxane Delisle, a friend and professional translator, who agreed to edit the book.  Also, a huge thanks to a former co-worker Stephan Vermette, who proof read my initial translation of the book. 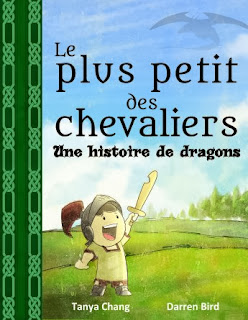 Posted by Tytanima Press at 04:10 No comments: